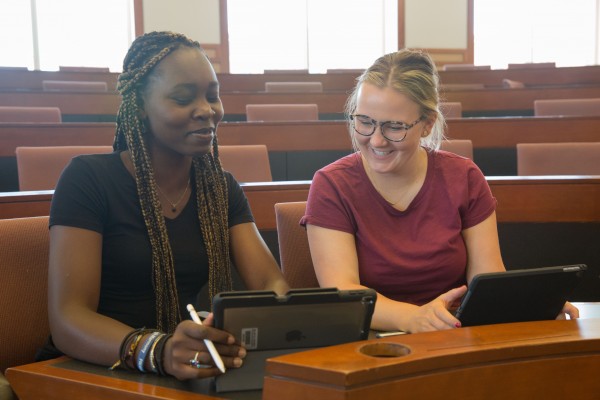 Digital Flagship is bringing technology kits and training to first-year students across campus, a Mobile Design Lab set to launch in March, and coding curriculum coming later in 2019. But the initiative doesn’t stop there, Digital Flagship also brings the annual opportunity to visit Apple’s Cupertino headquarters for a three-day session with their app design experts, focused on building the framework for a new app to serve the Ohio State community.

This year, based on the university’s commitment to the mental health and well-being of our community, a team of Ohio State students, researchers, administrators and developers visited Cupertino to conceptualize an app to support student mental health.

The process began with student-led discussions of strengths and opportunities in the current resource landscape, designed to help the team focus on how an app could fill real needs.

“It’s a very fast, engaging process and student voices are at the center,” commented Jessica Phillips, Associate Director of Student Experience for Digital Flagship. “The first day was spent hearing directly from this incredible group of students about their experiences with accessing mental health resources for themselves or for friends at Ohio State.”

One of the students who joined the trip was Savannah Sockwell, an LGBTQ advocate and fourth-year student studying public affairs.

“One thing I advocated the most for in the app was community,” said Sockwell. “I felt that we needed to incorporate a way we could use the app with a friend. By adding in the share feature on the app students will able to share useful content they found on the app to other friends. Most times it’s our friends we reach out to first when we are having a difficult time.”

After identifying a key group of opportunities that the group felt an app could help address, the final two days were spent building a series of iterative models that honed in on what a final app might look like.

“Over those three days we really saw things shift and change,” said Phillips. “We learned that some ideas we started with may not be well served in an app, while other challenges we did not initially identify needed to be addressed in order to make a really effective app that would contribute to a better student experience. Our goal throughout the process was to create something that would really serve students in the ways that would be most valuable.”

The model developed in this three-day design session will serve as a guide for the creation of a wellness app built by Ohio State developers that blends connection to university resources and an interactive, personalized interface to encourage the formation of healthy habits and the building of a strong support network.

“Ohio State is a huge place. Having resources in one place is incredibly valuable,” said Emilie Meade, an Ohio State Developer who participated in the sessions. “More than that, features like timely content and interactive challenges and achievements can allow a student to tailor the app to their needs and interests, really making it something useful for them.”

Now that the team has returned to Ohio State, developers will begin building out an app based on the framework created at Apple, and the university community will be engaged for feedback, content and user testing prior to launch. Release timelines are currently being identified.

Questions may be directed to digitalflagship@osu.edu.