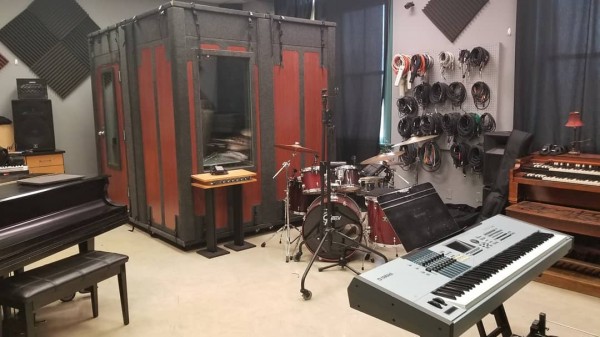 The donated WhisperRoom is being used by students in the Fort Hayes Career Center's audio production program.

Do you hear that? For students at Fort Hayes Metropolitan Education Center, the answer is hopefully “Not anymore.”

“I had been trying to get a WhisperRoom in my studio for years,” said audio production instructor Ryan Van Bibber. “The building I’m in is 150 years old, so we’ve always had a problem with isolation in our recordings.” 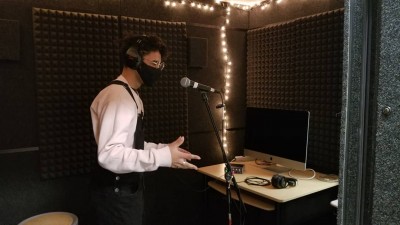 Fort Hayes student Roxy Moses records inside the WhisperRoom.
The donated booth is valued at $11,600; brand new, it retails for around $19,000. Ohio State originally purchased the WhisperRoom in 2008, and it was used in Digital Union locations on the Columbus campus until 2020, when the Prior Hall DU closed. The DU in Denney Hall already has professional-level audio and video studios, so the freestanding booth was no longer needed.

Unable to find another Ohio State unit interested in the booth, Stephanie Orr, ODEE director of learning experience, emailed Van Bibber to ask whether Fort Hayes could use it.

“I was familiar with the value this would bring to the students,” Orr said. “I’m excited we were able to share an unused resource and put it to good use in support of education.”

Orr and the ODEE learning environments team were able to help Van Bibber navigate the steps required to officially donate the room to Columbus City Schools in December 2020. It took a crew of eight people to move the booth, which is approximately 12 feet on each side and 10 feet tall, from Prior Hall to Fort Hayes, where Van Bibber spent three days reassembling it.

Students at Fort Hayes returned to in-person classes in February and have already started using the booth for recording music and other audio.

Learn more about the technology and resources available at Ohio State's Digital Union locations on the ODEE website.